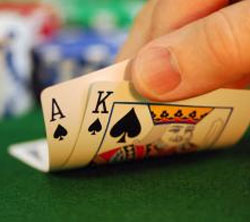 Blackjack games are played between the player and the dealer. In all land casinos there are several players at the blackjack table. The game is played with the help of 1-8 decks. Each deck consists of 52 cards and they are dealt by the dealer from a special box that is called a shoe. The main idea of the game is to get 21 points earlier than a dealer but without going bust, which means without exceeding the number of 21. It is very important to learn how to play blackjack before start practicing. So, here are the basic blackjack rules - https://blackjack-casino.jp/rules.

Hit - this option allows players to take one more card. Players can hit as many times as they want until they stand or bust.

Stand - if players stand, they take no more cards.

Split - if the first two cards that are dealt are a pair of cards of the same value, a player has the right to split them and play with two different hands. There is even the strategy for splitting pairs for players.

Double - this option allows players to take one more card and double the initial bet. However, after doubling players stand automatically.

In order to know how to play blackjack, players must know the value of each card. So,

We have 12 guests online