Blackjack Variations You Should Know

Blackjack Variations You Should Know 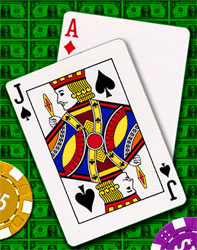 Blackjack is one of the most common types of games and players are very much interested to know if there is more varieties of this game that they can also try. Blackjack never stopped to amaze people and it never stopped to entertain them as well.

This variety came from Great Britain. It’s very famous especially at the beginning of twentieth century. Today you can play this variation not only in European casinos, but also online. Typically, 8 players can join in a table during a Pontoon game. There will be one card deck and it will be used for a particular game. The usual Pontoon game can be played with eight decks using 52 cards. As any at any other blackjack variation, some rules may be different at different casinos.

It started out in 1990s, 1995 in particular by an employee of a casino club. It was named Spanish for the reason that Spanish deck of cards was used for this particular game. In this deck 10's are be missed, so there will be 48 cards in 1 deck only. Some game details are a little bit different from those we've got used. You shouldn’t be surprised about the famousness of this blackjack variety. Do you know that a lot of blackjack tournaments today use Spanish 21? This is because this variation is extremely interesting to play and it involves lots of skills which players may show to others.

This variant is quite complicated especially if you will use the split option. If you want to try, you need to use both hands of the cards, this way you will have more odds of winning. You shouldn’t forget to put on equal amount of wager for both of your hands. This variant is so interesting and if you can switch 2 cards using both hands, you will rather feel the easiness of the game. You can also impose special strategies during this game.

This game is known worldwide especially in Las Vegas casinos. This name of the blackjack game was taken from Vegas City, place that offers a lot of casinos to all gamers. If you want to play you need to learn the rules first to be able to understand what going on at the table. It doesn’t differ from a conventional game a lot, though slight differences exist. This is played by not more than four decks and every player needs to split the Aces once during the game. If you do this you will get more cards and you will not have a double after doing the splitting process.

There are other variants available for you if you are very much interested to play the game. You will also be able to learn some of the games by visiting the internet informational sites and by buying books as well.

We have 11 guests online